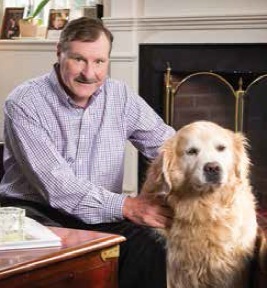 John Purtell, President of Perimeter Technologies, Inc. is a Philadelphia native and graduate of Penn State University, where he earned a Bachelor’s degree in Business Administration. Prior to college Purtell proudly served with several US Army airborne units including the 101st in Viet Nam. Following college, Purtell assumed a managerial position for a large manufacturing firm in Philadelphia where he rapidly ascended to become responsible for materials and production for three facilities.

But Purtell was ultimately seeking his own business so in 1976, he took a significant risk by leaving his position at Equitable to start a business based on a totally unproven and unknown technology. Stay-Put was an electronic pet containment system invented by Richard Peck of Trexlertown, PA. Purtell purchased the patent from Peck and began the process of building a highly successful business. He changed the product’s name to Invisible Fence®, and created a comprehensive installation and training process. After several years of building sales in the Philadelphia area, Purtell began to expand the company by marketing the Invisible Fence® product nationally.

As they say, “The rest is history”. Purtell led a highly successful effort in building a large dealer network, consisting of over 350 independent dealers and operators in the United States and five international countries. His product generated over $50 million each year while employing over 100 people in sales, engineering, marketing, and manufacturing. Purtell blazed a trail for several competitors as well; these companies now represent an industry that generates over $300 million each year.

In 1993, John Purtell sold his interest in Invisible Fence® while the company was at its zenith. Today, the company is on its third owner; an American company that specializes in Chinese manufacturing. From 1993 to 1998 Purtell honored his non-compete agreement by creating an exciting new Company in the golf industry but his desire to compete in the electronic pet containment industry never waned. Once the clause expired, Purtell sold his golf company and re-entered the pet containment business on a path that eventually led him to Bob Slattery, a successful Cincinnati entrepreneur looking to expand his own pet containment business, a product called Pet Stop®.

Purtell teamed up with Slattery, joining Perimeter Technologies in 2002. Since that time, sales have grown, on average, over 85% each year with some years experiencing growth exceeding 100% over the previous year’s performance. At Pet Stop, Purtell is joined by several of his former Invisible Fence® compatriots, and together they have built the Pet Stop product into what it is today – hands-down the best pet containment system in the world.